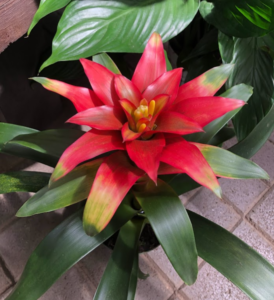 The Bromeliad family of plants is amazingly diverse, with eight botanical subfamilies and almost 3,600 known species. There are bromeliads that grow up to 50 feet tall (the puya raimondii) and bromeliads that you can eat (ananas comosus, better known as the pineapple).

But today we are focused on those species of bromeliads that can be grown indoors as a striking – and not to hard to maintain – houseplant.

Here’s the really interesting thing about bromeliads – they typically only flower once in their lifetimes. The colorful beauty of the plant is actually its leaves, or bracts, that are often mistaken for flowers. A bromeliad grows by added new leaves to the center of the plant. At some point, the center will become crowded and new leaves will no longer have room to form. The plant then starts producing “pups,” also known as offsets.

Caring for Your Bromeliad

Bromeliads have few needs and very few problem pests, so with good maintenance, you can enjoy one in your home or office year round.